So, the bell tolls for us. There will be blood, and it will be ours, though Europe will be damaged, too, by our exit - possibly fatally. The wilful, self-harming, bigoted stupidity of this vote beggars belief. Millions of words have been written about it, and so it feels as though there is nothing left to say, and mine have fallen on stony ground or been wasted on the converted anyway. Tired of trying to think up more and more persuasive arguments, I have opted for a memorial collection of graphics + some words, to bring them together in one place. I am sure the books on why this has been allowed to happen have already been started. I'm not going to write one, but I think that there are interesting speculations to be made around the topic of Why. What the fuck did we do, to deserve such retribution: our whole world changed by a handful of people angry at their world, as much as Europe.

1)  Perhaps there was a kind of complacency, born of the belief that the Remain course was so self-evidently right that people MUST see this and vote this way. All the politicians, experts, independent think-tanks, the Governor of the Bank of England, World leaders lining up to declare that it was a thoroughly bad idea to leave the EU - against the Leave leadership: oddballs, clowns, opportunists, self-seekers and egomaniacs, backed by a few publicity-seeking media-whores. No contest: no-one in their right minds would vote for that lot, surely? They had no facts, and not even well-thought-out arguments about the consequences of Brexit, just rose-tinted wishful thinking. Surely no contest?

2) Nobody listened to the people, especially outside London. It's not a reliable index, but the number of  Leave posters in windows outside the metropolis was striking. At some point it became a popular movement, possibly when Boris did his spectacular pirouette and jumped on the bandwagon. As he segues into The Serious Politician, he has become a serious threat. He is charismatic and people do like him: he makes populism popular.  There is an uncomfortable parallel with Winston Churchill, also laughed at and reviled as a younger man but who grew in the job, to confound his critics and be loved by nearly everyone. If it comes to a straight fight between him and Gove for the party leadership he will massacre that intensely disliked unfortunate in the first round. Unless the rump of Boris critics threatens to split the party.

3) Immigration: for Remain, this was the hot potato. Political correctness, and the knowledge that it was an Achilles heel, persuaded Remain to gloss over it. But it couldn't be ignored, and the Sun, Mail, Express's daily front pages on Migrants made sure that for much of the public it was the issue, the main, fulcrum issue of the whole campaign. Remain was tame and offered little, and so it looked evasive, even secretive over policy, not helped by Corbyn's honest, principled but politically fissile reference to 'no upper limit on immigration'.  Leave had no scruples on this issue, grossly exaggerated its importance, managed to pull off most of the racist stunts without ever using the word 'race'  just a knowing smile. They knew it was a popular bandwagon that could transport them to victory if anything could, and they exploited it ruthlessly.

4) It has been estimated that in terms of readership, three quarters of the newspaper-reading population was exposed to the daily drip, drip of anti-migrant propaganda from the Sun-Mail-Express-Telegraph-Metro axis. It speaks for itself: 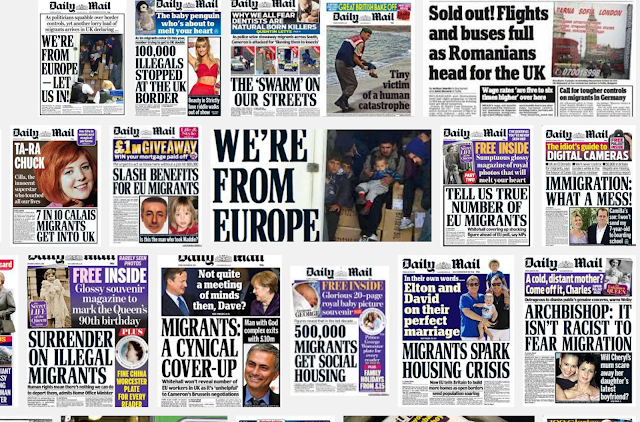 Leave grasped the nettle and secure in the knowledge that it had most of the Press behind it, helped the genie out of the bottle: it became OK once again to 'worry' about non-white immigration so long as you just called them migrants.

5) I am angry at a fundamental and telling gaffe by the BBC: not one incident, but their whole approach to coverage of the referendum.  Yes, they pursued their usual even-handed, balanced approach: meticulously inserting both sides of the argument: whenever a Remain supporter was interviewed a Leave supporter was interviewed in seconds flat, equal amounts of coverage, no inclination of BBC staff in one direction of the other (apart from Laura Kuensberg making it very clear where her sympathies lay and using more aggression and persistence with Remainers). So what's the problem ?  The problem is that the the two sides were not equal, so treating them equally was to elevate Leave hugely above its proper station. Nine months ago Leave was a minority position with virtually no expert support, a pressure group of a minority of MPs with only the likes of Gove and the ghostly presence of IDS at the helm.  By the time the campaign proper starts, the BBC presents them as equally viable, equally credible contenders with equal airtime. Usually minority parties (like the BNP) get a smaller number of party political broadcasts for example. What happened to that rule? A fair representation of reality at this point would have been about 3 Remain broadcasts to 1 Leave. What happened was effectively positive discrimination in favour of Leave. An unfortunate oversight, an unintended consequence of trying to be even-handed? Maybe. Or maybe, in its perilous financial position the BBC simply couldn't afford to alienate its paymasters and decided to back both horses. It was a major mistake which undermined the democratic process. Leave came out First amongst equals, when that equality was manufactured in the TV studio.

6) The Labour Party looked as though it couldn't make up its mind how much it wanted to contribute to the Remain campaign, and by the time it started to get its act together it was too little, too low profile, and too late. Corbyn's part was tentative and equivocal with some unfortunate quotes and not enough of the kind of leadership that would have got the core vote out. Not a distinguished episode in the history of the party. It was after, all the loss of Labour voters in the traditional industrial areas - the supposed Labour heartlands - which was the most unexpected and critical aspect of the voting pattern.

7) The Peasants' Revolt. The Psephologists will have their say in the next few weeks, but from here it looks like the ordinary voters outside London giving two fingers to the politicians, both Tory and Labour, to the Establishment, to the South, and to the middle class on an issue close to their hearts: not just immigration and the EU, but also austerity, declining services, neglect of the regions, and simply not being heard by the political classes who take decisions, far away, for and about them. It feels like a revolt, and I'm guessing that had the vote gone just the other way, and given their spirit, there would have been more alienation, anger and protest. From people for whom the issue is not about the price of French cheese or holidays, but the British being thoroughly fromaged-off by their masters. All of them.

8) Finally, a lot of responsibility lies with Cameron. A stupid, unnecessary, unpredictable, risky political gesture - way too dangerous as a means of deciding such a vital issue. So why did he call it?
Because he had to, because he'd promised to, because that's probably why he won that election. He sensed the public hunger, and the growing unhappiness around the issue (that Leave tapped in to, successfully). So he survived by buying off the electorate with the promise of a people's verdict. Politicians often over-estimate their ability to influence people and control events. He got this one wrong and Brexitgate will be remembered as an own-goal long after Porkgate. 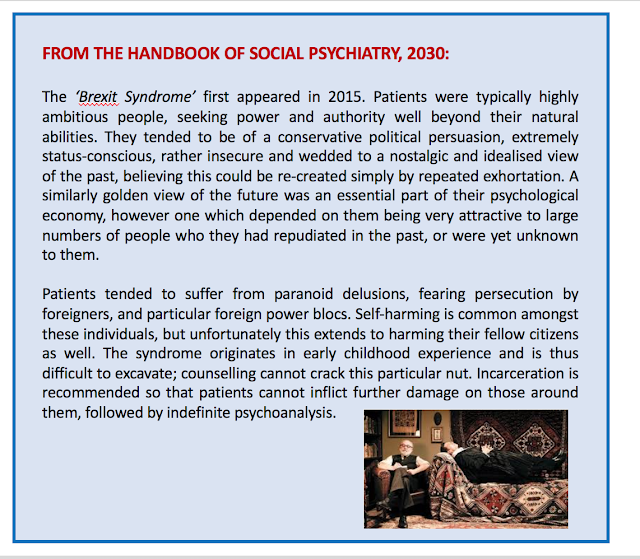 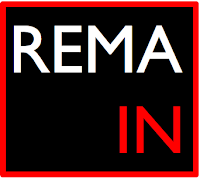 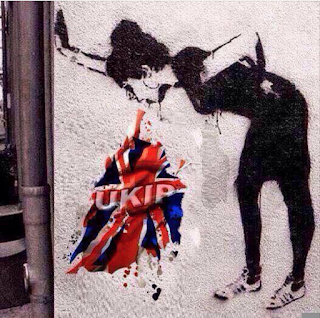 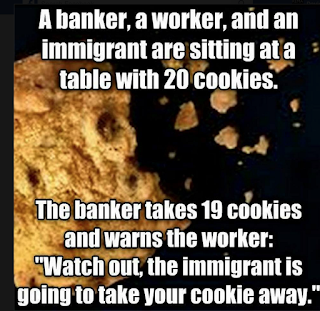 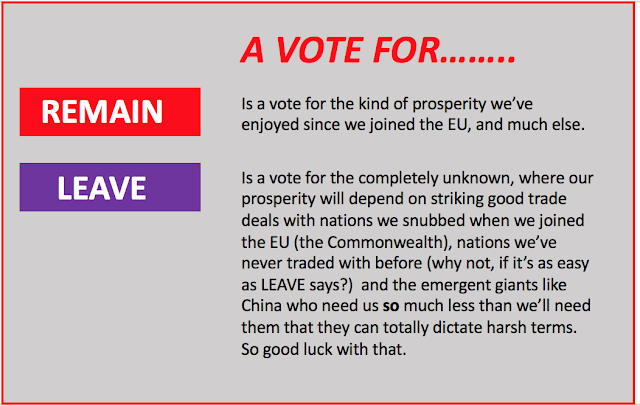 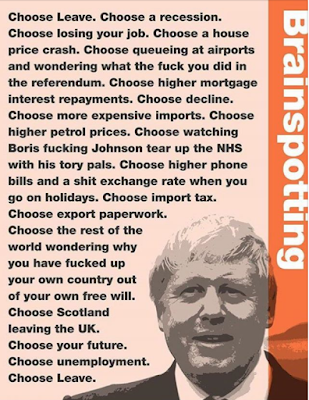 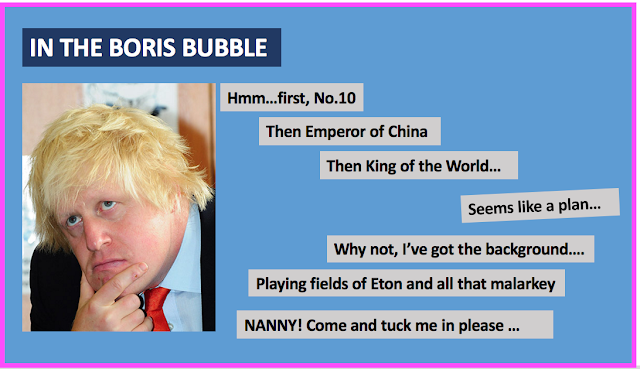 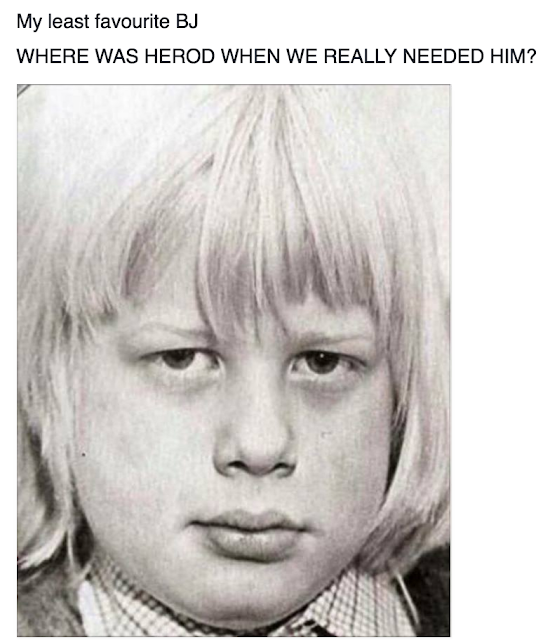 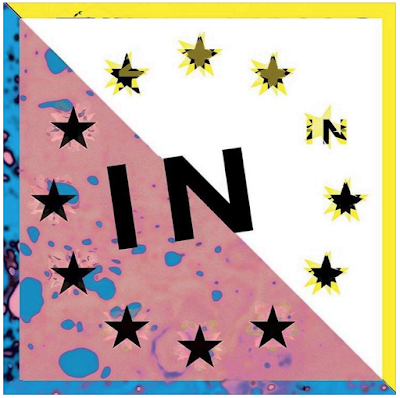 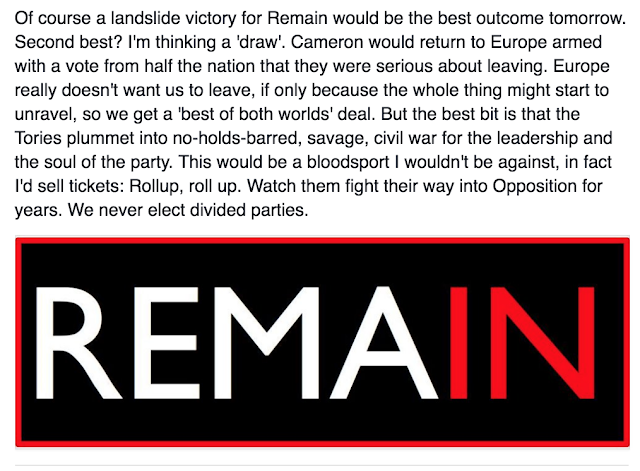 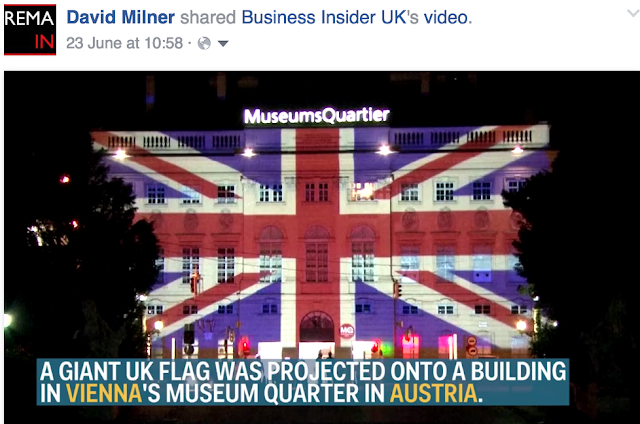 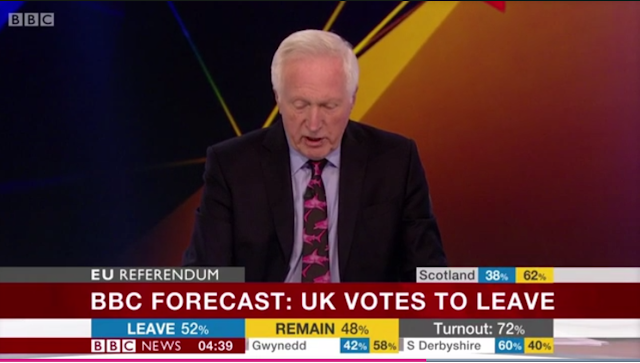 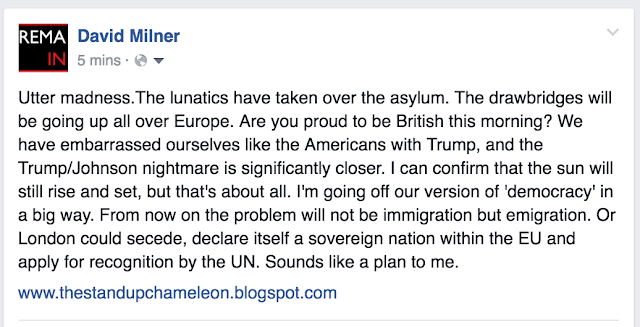 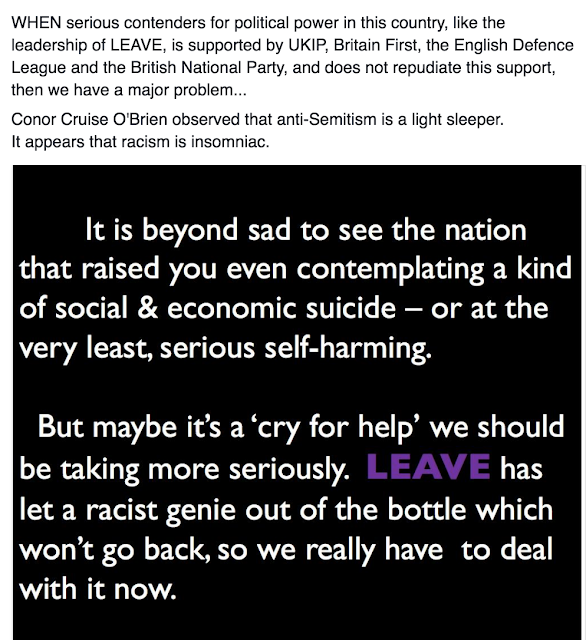 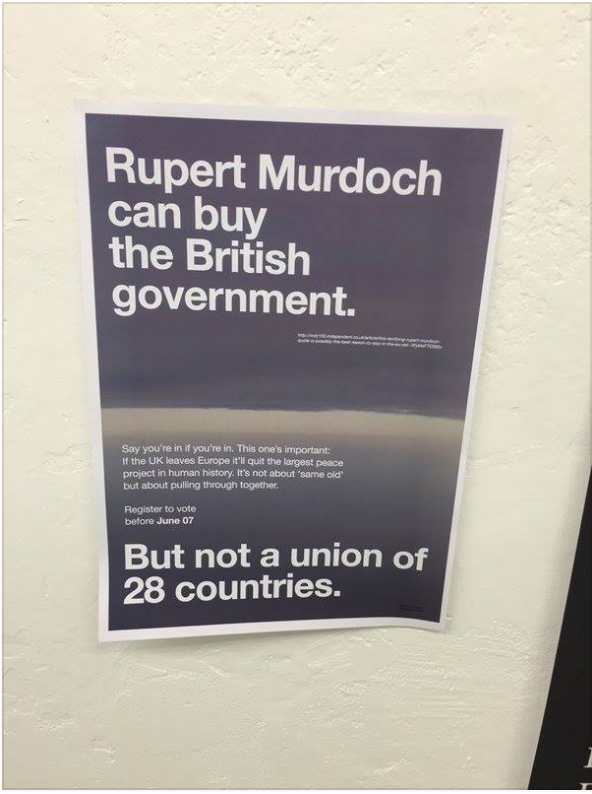 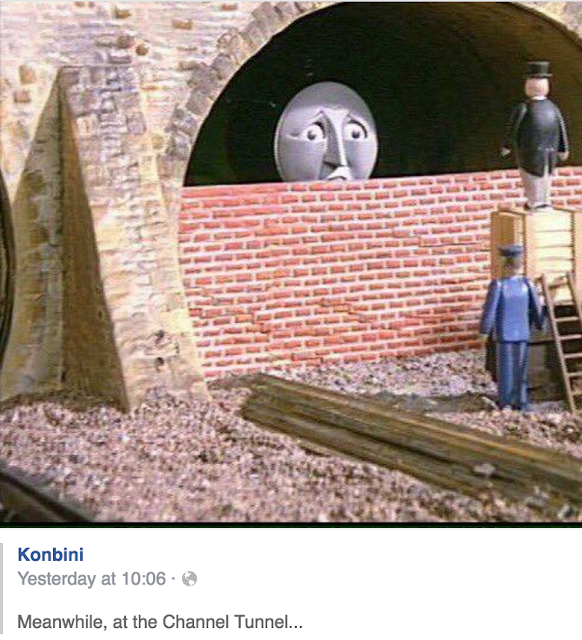 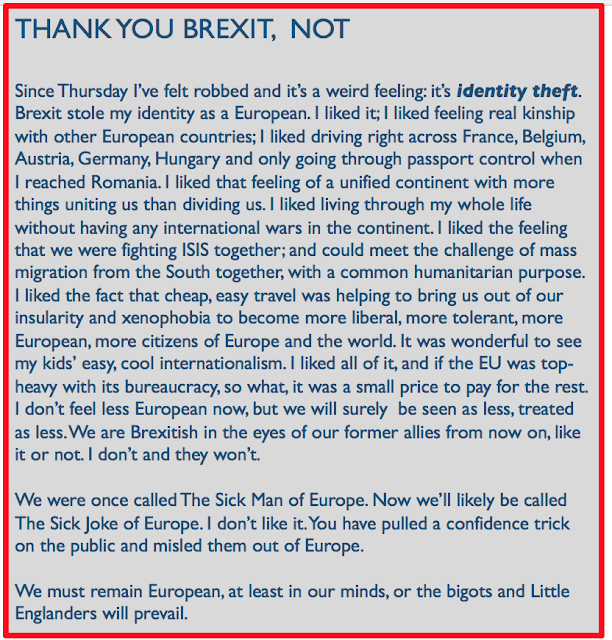 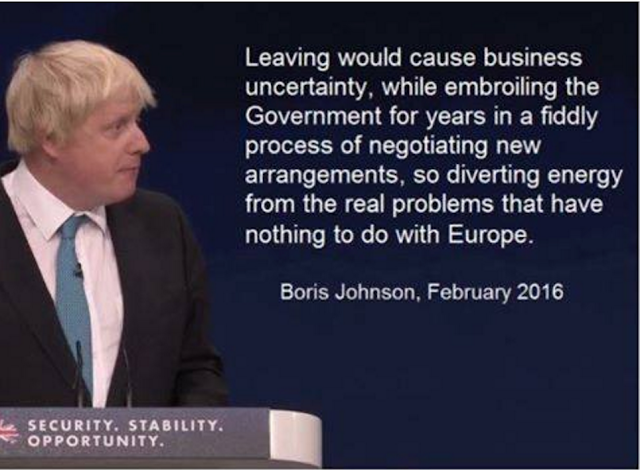 GOOD NEWS, ALREADY!
A strategy has already been devised for making up and exceeding all the trade we have lost with EU countries through Brexit. As befits our proud maritime history, it centres on a very large ship, packed to the flight deck with British products and services, British salespeople and diplomats, and British crew. Even the passengers’ entertainment will have a distinctly British flavour with Sir Cliff (half-Indian but we’re very inclusive) providing the cabaret and his friend Sue Barker running nightly sports Quiznites. For it will be a very long voyage calling at practically every port in the world. Despite his recent protestations it will be captained by David Cameron assisted by Paddy Ashdown of the Special Boat Service, and pursered by John Prescott: a dream team, no question.
The ship has been re-named ‘Titanic McArkface’. Even as I write it is being loaded at Southampton with legendary British products and miniature service outlets are being installed in a capacious Mall: Marmite, Oxford marmalade, M&S, Dyson, Aston Martin (many know the cars from Bond films, so they practically sell themselves to the super-rich), BHS (no, scrub that) Shetland knitwear, whisky and haggis (decision pending), Wimpy Bars, Chicken Cottage, Ladbrokes, Poundland, Sainsburys, Duchy products, Eccles cakes, Mr Kipling,Taffi Indian Steel, miners’ lamps, speed humps, British bobbies, Royal Family souvenirs, boxed cassette sets of The Archers: the list is almost endless. Deckspace is devoted to the outdoor aspects of British culture with tiny Wimbledons, Henleys, and Grand Nationals. Jeremy Clarkson & Lewis Hamilton will host a permanent go-kart grand prix involving teams in each venue. There will just be space for a display cabinet housing all the international trophies won by the England football team since 1966.
The British are coming! This commercial and cultural invasion will ensure our place on the map, as a little speck off Europe, but with limitless potential. It is true that no trading arrangements have yet been made with any of the embarkation points targeted, nor indeed permission to land granted. But these things take time. There will always be unhelpful responses from nations who fear the might of British mercantile endeavour, because they fear the competition (Russia: “Our nuclear submarines will sink your ship”; Germany: “we will bomb your ship”; France: “Pff. We will ignore your ship”; America: “You think you’ve got problems, we can trump yours”.) We will rise above them and show our own moaning Minnies what kind of stuff we’re made of. STOP PRESS: we have just received a very welcome invitation from poor Syria (from their International Strategic Incendiary Supplies people), to mount a demonstration of our entire portfolio of arms products, with the promise of firm orders.
Editor’s note: this is no more fanciful than any of the Brexit claims for the ease of making future trading arrangements outside the EU.

"Sometimes turkeys do vote for Christmas......."